Our slow family travel time in Wyoming’s Flaming Gorge gave us a moment of calm before our trip was about to completely change. And to get ready for the next phase, we needed a few things, that many a traveler might need after a week of camping.

You know: laundry. A shower.

And some major water time.

We’d also learn some hard facts about motel breakfasts, romp at a local splash pad, and have illegal fireworks in our room.

First, though, we had to face some fears about the motel pool…

…Never get the apples at a motel breakfast…
…But always get to breakfast early…
…To swim? Not quite…

…Smart choices about muffins: banana, no; chocolate, yes!…
…Good slow family travel karma…
…Our way into a new, big change for our trip…

Making our slow family travel way across the sparseness of Wyoming, we crossed the Continental Divide. The vast space marks the boundary between which waterways flow towards either the Pacific Ocean or the Atlantic Ocean. Near Laramie, the wide blue sky ended as we drove under a thick, dark gray thunderstorm that laced forks of lightning between a wind power farm’s tall, white windmills.

In Fort Collins, Colorado, we had pre-booked a motel stay for a couple of days. From there we’d meet Jodie’s parents in nearby Loveland. That gave us two nights and a full day in Fort Collins to scrub up, wash clothes, and tend to some work. But as far as the kids were concerned, our motel time also meant we’d spend as much time in the motel pool as possible.

The pool’s a little scary

In Bear Lake, Aster could go far out into the water and still touch the ground. But at our motel pool in Fort Collins, in many spaces she could barely touch her toes to the bottom. Fear and uncertainty flashed in her eyes. Sometimes she got out of the water, scared and unsure of what to do. The last time she’d been in deeper water, she was still wearing a floatie (and she had said that in the pool, she didn’t want her life jacket).

We gave her space, and the occasional snuggle, and lots of patience and time. When she was ready, she tried again. Sometimes she would try to swim or paddle, and wind up gurgling and spluttering down into the water. One of us would pull her up, give her a hug, and share some encouragement. Connor especially was so supportive of his sister, clapping as she paddled and splashed, or telling her to try again.

Over time, visit by visit, small changes started adding up.

Holding her nose, Aster would dip down into the water, a little deeper and longer each time.

Time after time, we’d play in the pool whenever we had a chance. Aster splashed and paddled, dunked herself into the water and worked on moving her arms. Splash by splash, the fear faded. We gave her space to try, and patience to take breaks when she needed. Bit by bit, confidence replaced fear. Ability replaced timidity. Determination replaced wariness.

Aster had some literal ups and downs in the motel pool, but in time, she set herself up to learn to swim.

Get to the motel breakfast early… but skip the apples

“When it comes to staying in places that include breakfast,” Anthony said to the kids our first evening, “There’s something I’ve learned that’s really important: Always get down there early. If you go late, all the good stuff is gone.”

Fast forward to the next morning: “Come on everyone!” said Connor, pulling on his clothes while alarm was still buzzing. “We’ve got to get to breakfast while it’s early!”

Thankfully, it wasn’t too early. Just right, actually. And we did indeed have our pick of muffins and fruit, hot plates of omelets and sausages, and all the good jams (leave the grape, but don’t forget the mixed berry).

After Connor took one bite of a shiny red apple and grimaced, we also got to explain why you don’t bother with the apples at a motel breakfast. Has anyone ever had a motel or cafeteria apple that wasn’t completely flavorless? It’s incredible how something can be richly colored yet absent of flavor, and both crisp and mealy at the same time.

Connor’s helpfulness didn’t stop at being our family alarm clock. He ordered and brought back plates of food for each of us, and got juice for himself and his sister. He and Aster also went to the buffet together, and picked through the pre-packaged muffins to find the good ones (chocolate muffins, obviously, not the weird banana ones).

The Fourth of July, the USA’s Independence Day, was our one full day in Fort Collins. After breakfast we relaxed at a splash pad and park (well, we adults also got some work done). After a dinner out that evening, back in the motel room, the kids jumped on the bed and waved their arms, shouting, “We’re illegal fireworks! We’re illegal fireworks!”

Washed, refreshed, and ready for a big change in our trip

After getting to breakfast early again, and one more romp in the pool, it was time to leave the little motel bubble that had helped us clean up, wash clothes, and relax for a couple of days.

And it was time to top up our slow family travel karma.

While Anthony was taking some of our things to the car, a man waved at him and pointed to his minivan, which had the hood up.

“Any chance I could get a jump?”

A few minutes later, the man’s van was running again, and Anthony was heading back to the room. Travelers take care of each other. Someone needs a jump? You do what you can. After all, the next person who needs help might be you.

We hitched the camper back up to the Outback, and made our way to nearby Loveland. There, our trip would enter a new phase. A big change.

We’d drop the camper off with an acquaintance, who graciously said we could park it in her driveway for a few days. As we pulled up, a silver truck soon came into view too. Jodie smiled, but her eyes were also wet.

We hadn’t seen her parents since before the pandemic began.

Now, they were here. 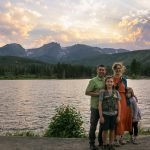 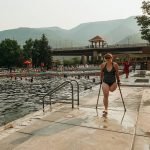 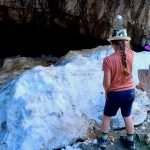 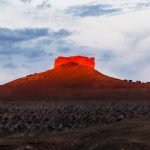